Of Bear Bait and Recycling Bins: The Modern History of Rubbish in Emmet County 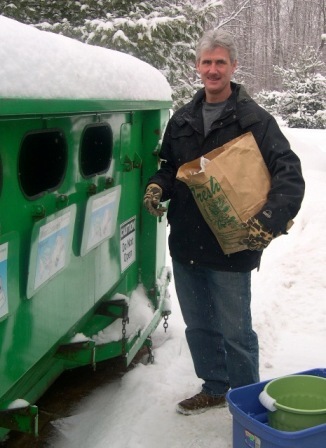 Paul Teike recycling during one of the many blizzards of 2014.

“If you said to people now, we’re going to handle garbage like it was done when I was a kid, they’d think you were crazy,” said Paul Teike.

Teike, 52, has been the Supervisor of Carp Lake Township for 10 years. His family has been in the Carp Lake area for generations.

His grandfather, Smokey Jordan, was the proprietor of Jordan’s Marina and his uncle owned a campground that was at the south end of the lake. As a child, Paul rode along on the businesses’ dump runs, “until I was old enough to drive that old truck myself.” As a result of his roles as family garbage hauler and Township Supervisor, Teike has inadvertently become something of a historian of the modern era of waste management and recycling in Emmet County.

“There was no gate or anything,” he says of the Township dump in the 1960’s and 70’s. “You could take anything, anytime of the day or night and throw it in there. Once in a while they’d burn it all [to reduce the volume]. The smoke really stunk, especially due to all of the rotten fish guts.” 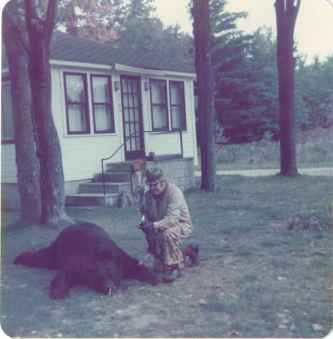 And of course, the fish guts attracted bears. “The black bear that held the state size record for many years was shot at the Carp Lake Township dump in 1974. Hawley Rhew got him and he weighed 615 pounds. That was with a bow and arrow.”

The dump did provide a recycling opportunity – if not a safe one – that was especially popular with kids: picking cooper, aluminum and batteries from the pile and selling them to junk yards. “You could walk in with a car battery and they’d give you $4 for it.” But the batteries point to a darker side of the old municipal dumps—which virtually every town and township had at the time: hazardous waste was going in unchecked. “Fertilizers, antifreeze, batteries, paints and stains…and in those days they were all oil paints.” Paints in that era also commonly contained lead. Freon containing appliances were fair game too, releasing the refrigerant which damaged the ozone layer.

“Eventually, we got to thinking that the bad stuff might be soaking down into the ground water. They installed a gate, set hours, and had someone there to keep an eye on things. They stopped taking chemicals. And they quit burning it.”

After high school Paul joined the Army, specializing in fuel transport and serving in Saudi Arabia, Kuwait and Iraq during Operation Desert Storm. When he first came home in 1984, the State of Michigan—which owned the land where the Carp Lake Township dump was located—had required the township to close the dump. As an interim measure, the Township was allowed to place dumpsters at the same location, converting it to a “solid waste transfer station.” “They charged 50 cents a bag and about broke even,” explained Teike.

Then came recycling. “It took me a while to come around to recycling,” Teike said. “I remember a friend up in Cross Village was all excited to take her stuff to the recycling drop-off and I thought, ‘if you want to save the earth, you need to go to Saudi Arabia or to the factories in Mexico where they have real environmental problems.’ I’ve been a lot of places and seen some pretty crazy stuff.” But when he did try recycling, he was struck by how much it really did reduce the garbage his family produced. “We didn’t have even a bag a week anymore.”

A tour of the Emmet County materials recovery facility sealed his commitment to recycling, “A theme emerged. The steel cans go to East Jordan Iron Works. The paper cartons go to Cheboygan. The mattresses go to a business in Gaylord. Everything is being recycled as nearby as possible. You feel different about recycling, say a mattress, when you know someone in Gaylord is taking it apart and selling the steel, wood, and everything and putting it to good use.”

2004 was a big turning point. Paul’s mother—who had been the Township Treasurer for 35 years—lost the primary election, while Paul retired from the Army Reserves and won election to his first term as Township Supervisor. He quickly learned that more change was in store for the Township’s garbage. The State told the township they either needed to close the Transfer Station or buy the property. “At this point we were charging about $2 per bag and still losing about $1,000 a year on the Transfer Station.” And, with two companies offering home garbage pickup, use of the transfer station was way down. It didn’t make sense for the township to put more money into the station. “I caught a lot of flak when we did close it down, but it was the right thing to do.”

Paul Teike has noticed other trends in waste management over the years. “There are less and less burn barrels. People aren’t even burning leaves anymore.” The Township now has a site where residents can drop off yard clippings, brush, leaves and lake weeds to be composted. Businesses too, used to burn waste, but have moved away from this. “I remember a lot of them had incinerators out back. Now they have cardboard recycling dumpsters.”

In addition to his responsibilities as Supervisor, Teike works in construction. A job in Harbor Springs years ago gave him insight into waste disposal practices even before his time. They were tearing down one of the original homes on the bluff to make way for a new house and as excavation got underway for the new foundation, they dug into the area where—decades earlier—the outhouse had been. “They moved it just a few feet each year and dug a new hole. What we found was broken dishes and teapots and such. They each had their own landfill—they threw their garbage in when they closed up an outhouse pit.” Though, overall, he noted, people didn’t have a lot of non-biodegradable garbage back then. “You didn’t go to the store all the time and come back with all these cans and packages and stuff.”

There’s no doubt about it: the past 50 years has seen extraordinary improvements in the area’s waste management systems, moving from dangerous practices which heavily polluted soil, water and air to Emmet County’s award-winning recycling program which makes most discards into resources, benefiting both the environment and the economy. As Paul Teike sums it up, “If you told people, ‘we’re just going to dig a hole out in the country and everyone can come and throw anything in it anytime and, then, from time to time we’ll burn it’—if you told people that now, they’d think you were crazy. There’s been a definite progression toward the good.”

A Letter from Max Putters

as one of the nine “Pillars of the Program” honored in 2020,
and concerning his early experience with recycling and also
the many others who deserve kudos for contributing in the early days of the system.

What a surprise, a big box containing an award recognizing me (Max) for contributions to recycling in Emmet County! That was a very nice gesture, a huge surprise, and very much appreciated. There are a great list of others, who also contributed as much or more than I did.

“We hauled these materials…in our wagons.”
My contact with recycling came during World War II, when kids collected scrap metal, crushed tin cans, and collected paper (mostly newspaper) for the War effort. We hauled these materials to a local gas station, about one-half mile away, in our wagons. There the station attendant weighed our collected items on a floor-model balance scale, and we received a small compensation based on how much we brought in. Good for candy, pop or ice cream at a nearby market. Also, our mothers collected “bacon grease” and probably other oily cooking residues, for were use in manufacture of military explosives. My mother, who was a naturalized US citizen, stated that “in Europe, people don’t throw anything away, as resources are very scarce”. I think that always stuck with me.

“…their collective foresight…
I wonder too, if it would be a reasonable idea to honor the County Board of Commissioners, County DPW and the citizens of Emmet County [of the time] for their collective foresight and vision to implement a public-based recycling service ? A huge factor was employing Elisa Seltzer as the DPW Director, which really kick started recycling in Emmet County, a program that forged ahead to an outstanding level of effectiveness, recognized state-wide, and still is today. The date was 1990 and the county was also searching for landfill sites before settling on the idea of a Type II Transfer Station. I think it was Dick Bidstrup, a Civil Engineer, who made the motion the hire Elisa, and he served on the DPW. The point of this recognition is to manifest what can be achieved when the involved parties share a mutual vision, e.g. recycling as a preferred solid waste disposal practice to landfills.

Paul Lenahan, also an engineer, prepared the first building plan for recycling services. He did this gratis and that started physical plant facilities for recycling at the Transfer Station. Vern Haderer was the first Transfer Station Superintendent and he experienced all the on the ground trials of operating a new public service in Emmet County. Lynn Johnson, County Controller, was also involved with communications to the County Board of Commissioners and funding Act 641 Solid Waste Plans, with the local match. Leading up to the 1990’s, landfills were still the preferred waste disposal systems and recycling was thought by many to be infeasible. Elisa was marching in uncharted territory when she took on the Director position with the County DPW, and she succeeded, probably beyond everyone’s expectations at that time.

Again, thank you for considering me for the award. As you know there was an army of supporters, and you and current staff are carrying on the legacy, with outstanding effort.

2007 – MORE COMMUNITIES COME ON BOARD

2014- THE YEAR OF TIRES, GOVERNOR SNYDER SIGNS ONTO RECYCLING

2017- CURBSIDE EXPANDS TO THE VILLAGE OF ALANSON

2021 - All DPW Workers Are County Employees